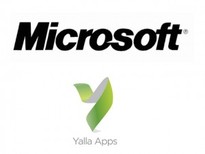 Yalla Apps Experience – RegistrationIf you happen to live in one of the white countries, behind the Windows Phone Marketplace Iron Curtain, and still want to develop and publish your Windows Phone apps, you have several options:

I have seriously considered all these options. For example number 1: It is quite easy for an European Union citizen to move to another EU country for several days, register with marketplace and then move back. By the way, I live 60 km (37 miles) from Austria, which is green. But the marketplace identity verification process is repeated every year, so you have to repeat this nonsense every year. Once your verification fail, your MP account is blocked and all your apps are removed from the phones of all your customers. (At least this was the case the last time I checked the MP policy several months ago, they could have changed it since then.)

Or the option 2 – a foreign company. I could quite easily establish a Ltd in the UK. Sure, it’s more expensive than a yearly marketplace fee $99, but still affordadble. But it is almost impossible for a non-UK resident with no business history to get a British bank account. I could easily get an Austrian bank account, but I wasn’t able to discover if both the company and its bank account must be in the some country or not. I haven’t found the answer on Microsoft web pages, asked several wise people including Microsoft employees, but nobody knew the answer. It would be stupid to try it blindly. By the way, you can pay for WP7 apps by the MoneyBookers British MasterCard from a lot of countries, but MB account cannot be used for receiving money.

The options 3 and 4 in short: It is a lot of work to maintain your apps in the marketplace. 5 – good for a lot of things, but not for making real money.

So the only viable option is a publisher. We know Marketplace is coming to Czech Republic with a Windows Phone Mango update soon. Mango is coming this fall, although considering the NoDo update execution the fall 2012 is a better bet. Just kidding. Microsoft Czech Rep. says devs could expect the Marketplace access this summer. In short: The best case is July 2011, the worst some time next year.

The selection of the publisher is a key decision. Once you publish your app with it and somebody installs it, your client is locked to your publisher forever. Thus, although there are several publishers now, for example Kinabalu Innovation orAppa Mundi, I decided to go with Yalla Apps, the only publisher officially supported by Microsoft. (And, by the way, the cheapest one too.)

In the best case I am going to need my publisher for just two months – May and June – but I am going to pay him the yearly MP fee for years ahead. So the simple question is:  Will my apps, published in the next two months, generate at least $99 yearly? I hope the answer is yes, so let’s go ahead! (By the way, the  arabian word yalla means go ahead or hurry up.)

ProcedureI would stress the importance of the step 1. The product description of your application in the Martketplace will include the following sentence: “Developed by [Nickname]“. When I registered several weeks ago I choose a nice Nickname, but I realized the Nickname.com domain is taken later. And guess what? The Nickname cannot be changed. I hadn’t activate the original account, so I registered again, under a different Nickname. But you cannot have two accounts with the same email and cannot change the email too, so I was forced to use a different email for the second registration. But the first email was the email associated with my PayPal account, which is required if you want to get paid. So I have to change my PayPal email now. (I have never did it before, so I hope it’s possible.)

I’ve asked Yalla to delete my first account and change the email address on the second one. So let’s see the outcome.

After the registration, this is your user dashboard. Notice which fields you can and cannot edit.

The next step is to activate your account and unlock your developer phone.